Chinua Achebe, in his book The Trouble with Nigeria, quotes an unknown political scientist from South East Nigeria who said Nigeria has an Igbo problem. There is no love lost between the Igbo of Anambra and Imo States, and the federal government of Nigeria. Since the 1970 collapse of Biafra’s attempt to secede, it appears Nigeria never solved the problems that led to the fall out. The Igbo have had a marriage of convenience with the other two dominant tribes – the Yoruba and Hausa-Fulani and the government as a new push for secession is taking shape.

There are many comparisons between the Igbo and the Luo, which make me wonder if Kenya has a Luo problem. The only Igbo to rise to the presidency in Nigeria is Nmadi Azikiwe – between 1963 and 1966 – who was then removed from power through a military coup. The following year, General Odumegwu Ojukwu announced the creation of the Republic of Biafra in South Eastern Nigeria. Ever since, the Nigerian presidency has revolved between the Yoruba and Hausa with the one term of Goodluck Jonathan an Ijaw from Niger Delta breaking the domination by default rather than by design.

Daystar University Parents Association Chairperson Dorothy Ng’ethe was late last years accused by Athi River Campus Students Union President Karetha Kirimi of tribalism after a slur against the Luo. According to Ms Kirimi, during the recent standoff between students and the administration, the DUPA chair asked her to call off the boycott and let the Valley Road Campus Students Union President, a Mr Otieno, “whose people are causing the government more harm than good”, to lead the boycott.

This is a statement from a private institution which is more in the periphery of the social sphere of many Kenyans. If you extrapolate that to the centre of national politics, you get a system that has been promoting up a systematic narrative of the Luo as “enemies of state”. One such narrative is that they are poor and their leader, Raila Odinga, is the “lord of poverty”. Jubilee Party official David Murathe was reported saying that the opposition (read Raila Odinga) want power but they do not have a stake in the economy.

This poverty narrative has been cemented in the lie that Kibera slums has over one million residents in a three million resident Nairobi. When the lie bubble burst, it was blamed on NGOs looking for funding. Politically, the fact of Raila Odinga, as area MP until 2013 – it was assumed that the Luo form a majority of Kibera residents – was used to cement the poverty narrative. Come to think of it, who has ever heard of relief food being taken to Luo Nyanza, even when crops fail in the country and the government distributes relief food? Certainly not I!

I had to read the 2016 report by National Aids Control Council to look for the story behind the national prevalence figures. I also spoke to a few medical practitioners to find out how HIV/Aids prevalence has remained high in Luo Nyanza counties despite numerous national and international interventions. One reason I got is that Kisumu is near Uganda, the epi-centre of the Aids epidemic in Eastern Africa in the eighties and early nineties. So why is prevalence lower in Busia and Bungoma Counties which border Uganda?

According to Commission on Revenue Allocation, fourteen counties deemed marginalised, suffered historical injustices and had less access to basic amenities, and were therefore rated as deserving extra allocation of devolution funds for 2018/19 financial year. These counties include Turkana, Lamu, Mandera, Wajir, Marsabit, Samburu, West Pokot, Tana River, Narok, Kwale, Garissa, Kilifi, Taita Taveta and Isiolo. There is no “Luo county” on that list. The idea one gets is that, when it comes to politics, the Luo are poor but when it comes to distributing funds, they disappear from the top of the list.

There are counties like Mombasa that receive hundreds of thousands of tourists and where the twilight industry is robust, but still it ranks better than Luo counties in Aids prevalence. Counties in Ukambani, with several towns and trading centres bubbling with long distance truck drivers who are known for promiscuity while plying the Mombasa-Great Lakes route still fall below Luo Nyanza. Turkana and Teso communities do not circumcise their men yet prevalence is lower. So, when it comes to wife inheritance, one has to wonder if widows from other regions in Kenya bury their sexual urge with their husbands hence abstain from sex. My take is that the Luo just happen to conduct their sexual escapades above board and most of it could be hot air.

My take is that because the false narrative has taken route, investigators go to Luo Nyanza with a fixed mind. Any deviation from the known rate of infection is pushed to the back in a typical primed bias. One experiment that Malcolm Gladwell used in his book Blink; the power of thinking without thinking, is interesting. People were shown a list consisting of five word sets, four of which made a coherent sentence. The subjects were asked to form that sentence. Take the set “shoes, give, replace, old, the” leading to “replace the old shoes.” All the sets had a word to do with the elderly, like ‘old’ or ‘wrinkles’. The people in the survey walked out in a slower pace than they had walked in – they had been primed. Experiments have revealed that people’s behaviour towards other people change drastically depending on whether what they hear or see is negative or positive. We can all be bias without thinking about it.

The government since 1960s has systematically projected the Luo as rebels who cannot be trusted with state power. The unresolved murder of the tribe’s illustrious sons in Argwings Kodhek, Tom Mboya and Robert Ouko leaves many unanswered questions. The incarceration of many others from famous sons like Jaramogi Odinga to laid back ones like Wasonga Sijeyo is proof that the Luo have suffered the brunt of government’s hand of steel in Kenya.

The 1982 failed coup by a group of predominantly Luo junior Kenya Air Force officers led by Sr. Private Hezekiah Ochuka gave the state more ammunition to justify their propaganda. Several Luos, including former US President Barrack Obama’s, father lost their jobs because of being perceived as being sympathetic to opposition forces then led by Jaramogi Oginga Odinga. The Luo were kept in non-influential positions or if one held a powerful post like former Permanent Secretary Hezekiah Oyugi, then you had to prove your loyalty beyond the normal. Most in influential positions are there by virtue of their skills and abilities rather than political or social connections.

Luos have a high affinity for academia. Prof. David Wasawo, a pioneer Kenyan educationist whom former Alliance High School head Carey Francis described as the “most intelligent student” he ever taught was bypassed and Dr Josephat Karanja, who was appointed Vice Chancellor at University of Nairobi in 1970. The first Luo to occupy that office at the most prestigious university in Kenya is Prof. George Magoha who got the job after an external professional body was tasked to conduct the interviews. He left a legacy that will be difficult to match during his tenure between 2005 and 2015. 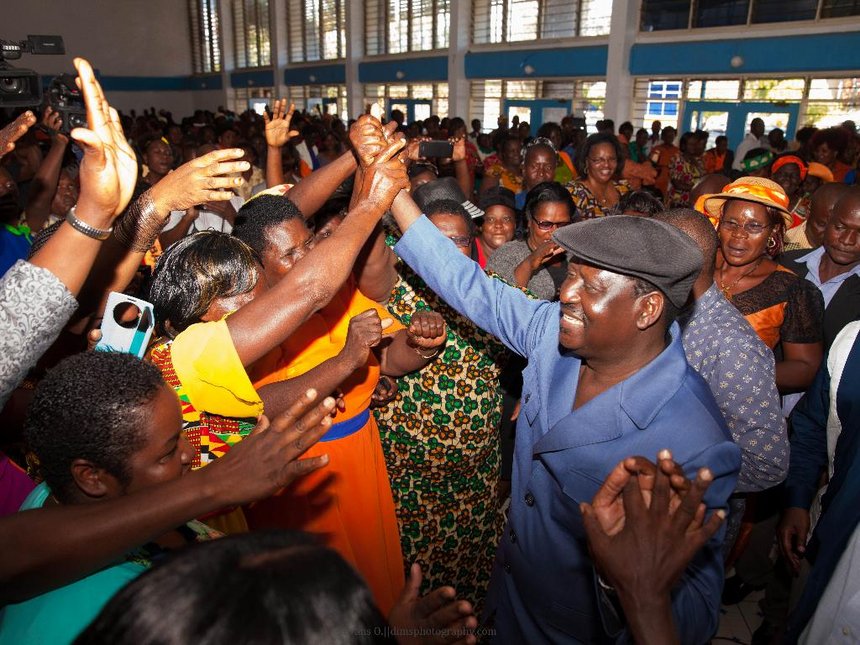 The Luo are the most politically conscious community in Kenya. This can be attributed to the crackdown and marginalisation from the government, but also to general intellectual and social robust culture among them. The first Mayor of Eldoret and MP for Nakuru Town were Luos in A. N. Oloo and Achieng’ Oneko respectively. To date Luos lead in holding elective seats outside Luo Nyanza. A Luo MCA is currently representing Kahawa Wendani in Kiambu County.

Several non-Luos have won seats in Luo Nyanza. Examples are Shakeel Shabir aka Onyango wuon Mogo who beat the ODM wave to clinch Kisumu East parliamentary seat as an independent candidate to Kenyan Somali Junet Mohammed in Suna East. The only constant that seems to put the Luo at loggerheads with State machinery is their undying devotion to Raila Odinga.

The just concluded 2017 elections have exposed the negative streak between Luos and the Kenyan state. The government deployed police in zones dominated by the Luo in Nairobi and Nyanza, in what some termed “pathological” levels. The ensuing killings went beyond the accepted levels for dealing with demonstrators. The election dispute was made to appear like it was only Luos that had a problem with the results.  Even the secession talk from NASA has been projected by Jubilee Party as a Luo agenda even as Raila avoids the topic to date. Coast leaders scuttled that narrative when Mombasa and Kilifi Governors announced their desire to push for secession of former Coast province.

The Luo are a talented, skilled and a determined lot. Even when the government pushed them away from influential positions in government, it is Luo brain and brawn that pushes the civil service cogs. In as much as they lack the entrepreneurial streak, leading corporates rely on Luo technocrats to get the job done. When it comes to spending, you can be assured that their money will always be in circulation. They, in conjunction with the Luhya, are also amongst the most athletic lot in Kenya.

Their negative attributes include a desire for justice and speaking out against real and perceived injustices. The Luo are said to be loud and boisterous which has brought about a saying that if you meet a “humble Luo” know that he is fake. In corrupt Kenya, many Luos are honest to a fault, and staunch believers in whatever resolve one has set his mind upon. Alas, these are not considered virtues.

To paraphrase Achebe in The Trouble with Nigeria, it becomes necessary that while Kenya is at the delicate touch and go stage of national evolution, the Luo must learn less abrasiveness, more shrewdness and tact and willingness to grant validity to less boisterous values. But do we really have a Luo problem?

The truth is that the Luo are a problem to Kikuyu elite (or the Kenyan elite in general) who see them as good labour but a possible threat as leaders of a revolution from the masses. They are also a pain to the corrupt kleptocracy. Kenya does not have a Luo problem; government has a problem with the Luo.

Recognising the need for constructive dialogue on the issue of the tribe, the Nairobi Law Monthly invites readers to send in well-articulated articles to and from different tribes, to speak to the need for national consciousness on Kenya’s ethnic composition, and create a pool from which we can share and accept our rich cultures. Our real need for acceptance of our differences and employing them for national good can only be realised if we hold candid, frank conversations, with a view to creating tools that work FOR, not against us. The Magazine reserves the right to edit – without affecting meaning – submitted articles in a manner that does not fan the passions and fires the country needs to put out.