The board at the Communication Authority of Kenya (CA) ignored management’s advisory for an out-of-court settlement with operator Airtel, which would have saved the Authority from financial and reputational injury.

CA management had warned that putting a defence against Airtel in a case the operator had challenged the demand of Sh2.1 billion license fee ($20,025,000) would be counterproductive, and would expose the Authority to financial and image losses.

Hardly a week had passed after initially agreeing to the proposal for a negotiated settlement, when the board inexplicably reversed its decision, reportedly from external influence.

Airtel had been fighting the license renewal fee since 2015 after CA reneged on its assurance that as a pre-condition for Airtel and Safaricom to acquiring assets belonging to Essar Telecom’s yu mobile which exited the market in 2014, each operator was to pay $5.4 million (Sh555 million).

The High Court in December 2017 upheld Airtel’s contention, thereby exposing CA to the risks management had warned of.

A June 2017 board paper had warned CA board of serious reputational loss for CA and the government if they contested the Judicial Review case Airtel had filed in the High Court to challenge the demand for license fee.

CA had been warned of the risk of reputational damage they would suffer if they pushed ahead with the demand to Airtel to pay the license fee.

As a result, the management had proposed an out-of-court settlement, which was inexplicably rejected by the board.

The board paper, a copy of which the Nairobi Law Monthly has obtained, had also highlighted other risks in putting a defence against Airtel’s case, namely, damage to the image of the country, disinvestment in the ICT sector, financial losses and constraint to CA in terms of legal fees and costs of litigation and exposing the Authority’s future decisions to scrutiny.

“The major risk is the impending litigation wherein the courts may quash the Authority’s decision thus exposing the Authority’s future decisions to scrutiny by way of questioning the very independence of the Authority as the ICT regulator,” the board paper states.

The reputational risk, according to the management, was because CA had assured Airtel that the moneys were not payable, an assurance that Airtel then relied upon.

“The Authority as a regulator should be perceived to be forthright, predictable and consistent in its decision-making and regulatory intervention,” the paper said.

“Government and its agencies need to promote certainty and a favourable investment climate and a negative reputational risk prejudices and endangers the growth of the same.”

In the paper, the management had also estimated that proceeding with the case was going to cost CA some Sh522 million, broken down as Sh200 million for the Authority’s legal fees and a similar amount for cost of the petition, Sh2 million in disbursement costs and Sh120 million in taxes.

Had the board approved an out-of-court settlement, CA had estimated that the legal fees would have come down to some Sh100 million.

“The Authority will also incur huge legal costs in defending its position in the matter considering the subject matter of $20,025,000. Even though the Authority has appointed external advocates to represent and defend the Authority in the matter, an additional allocation of the legal fees budget would have to be done to mitigate against this risk. The legal fees budget for F/Y 2017-18 stands at Sh50 million,” the management had explained in the paper.

The Authority’s board on September 26, 2017 approved an out-of-court negotiations with Airtel and directed that management “writes to Treasury formally recommending that a continued demand for license fees amounting to $20,025,000 will be prejudicial to all parties concerned” and that the management “obtains concurrence as appropriate to pursue the option of an out-of-court settlement without costs because an analysis of the facts indicated that the merits of success in this matter are low.”

However, a week later, the board reversed its decision for negotiations.

“The board, in discussing the matter, noted that the identified risks were not as detrimental as the risk of losing $20 million in license fees by the Authority. The board then directed that management progresses the court matter as opposed to settling the matter out of court. After due discussions, the board set aside the decisions made in their meeting of September 26, 2017,” the minutes of October 3 board meeting reads. 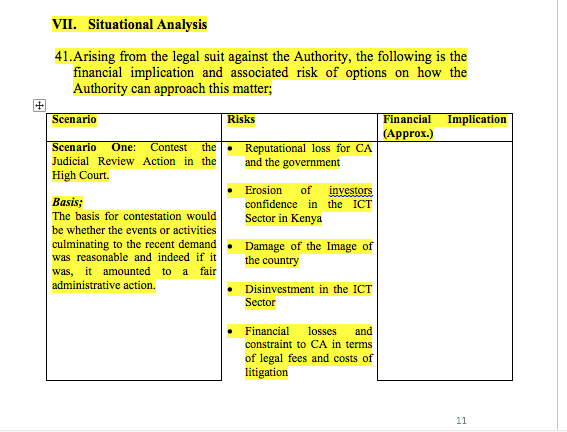 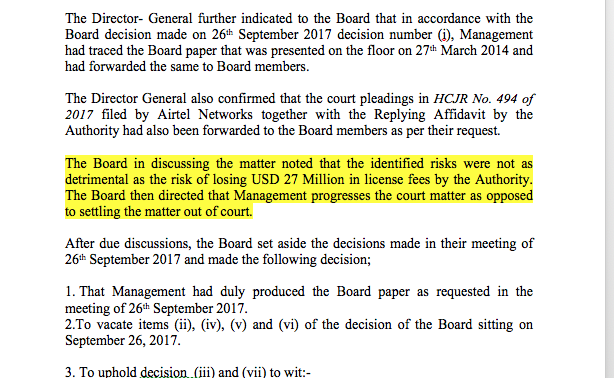 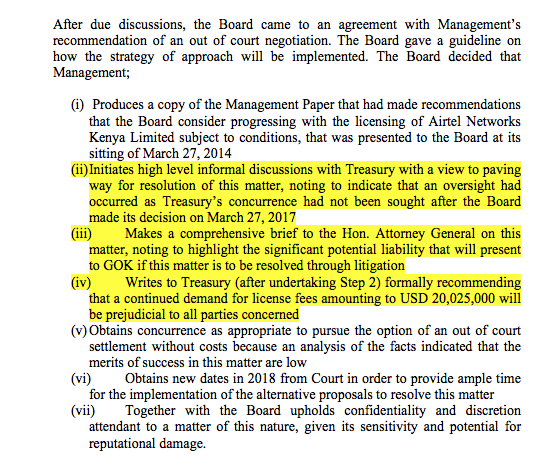 In some quarters, it is believed that the reversal of the decision may have been precipitated by some hidden hands from the National Treasury and the Ministry of ICT who were looking at ways to punish Airtel.

Having lost the case, it is the CA director general Francis Wangusi who has now been left to bear the burden for the lost case, among other boardroom issues.

Wangusi was sent on compulsory leave on January 12 for a period of three months “in order to facilitate the forthcoming audit of human resources.”

In his place, the board appointed the director of Licensing Compliance & Standards Christopher Kemei to act.