Increasing debt in Africa a cause for worry

That is how Idriss Déby, Chad’s president, now describes the state oil company’s decision to borrow $1.4bn (Sh140 billion) from Glencore, an Anglo- Swiss commodities trader, in 2014. The loan was to be repaid with future sales of crude, then trading above $100 (Sh10,000) a barrel. But two years later, as the price dived, debt payments were swallowing 85% of Chad’s dwindling oil revenue. For weeks schools have been closed and hospitals paralysed, as workers strike against austerity. On February 21st, after fractious talks, Chad and Glencore agreed to restructure the deal.

Chad’s woes recall an earlier era, when African economies groaned beneath unpayable debts. By the mid-1990s much of the continent was frozen out of the global financial system. The solution, reached in 2005, was for rich countries to forgive the debts that so-called “heavily indebted poor countries”, 30 of which were in Africa, owed to the World Bank, IMF and African Development Bank. With new loans and better policies, many of these countries turned their economies around. By 2012 the median debt level in sub-Saharan Africa (as defined by the IMF) fell to just 30% of GDP.

Today the median debt level is over 50% of GDP. That is low by international standards, but interest rates are generally higher for African countries, which collect relatively little tax. Economic growth slowed in response to lower commodity prices. As a consequence, there is much less revenue to service debts. The pace of borrowing has picked up. The IMF reckons that five sub-Saharan African countries are already in “debt distress”, with nine more at high risk of joining them. 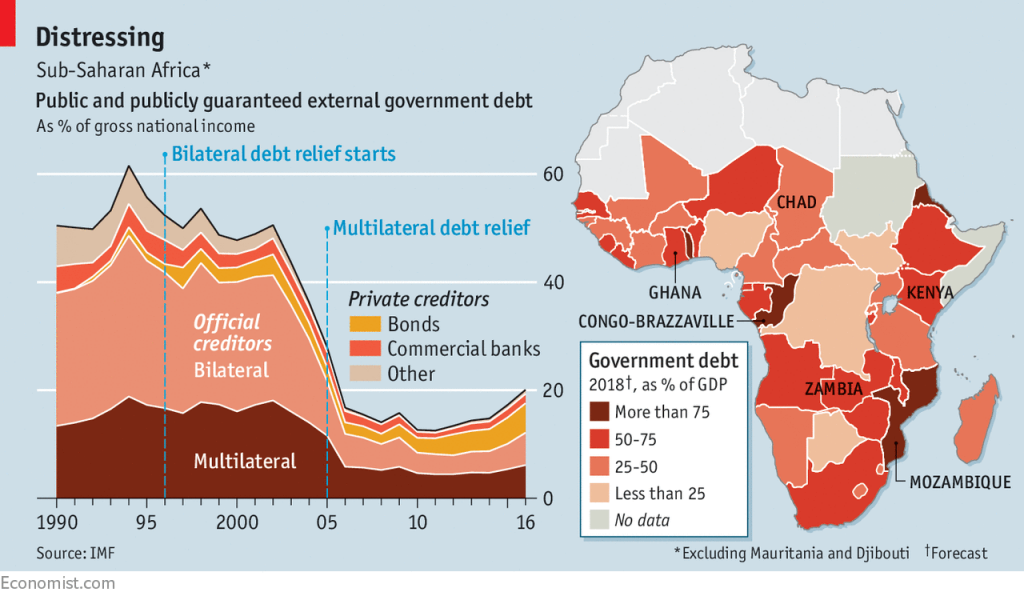 Lending to Africa surged after the financial crisis, when interest rates in rich countries sank to historic lows. Fund managers chased the high yields of African government bonds and the profits from a commodities boom. The biggest lenders to Africa had long been Western governments.

But since 2006, 16 African countries have sold their first dollar-denominated bonds to foreign investors. Interest rates in the rich world remain low, so several countries are scrambling back to the market this year. Senegal’s $2.2bn (Sh220 billion) Eurobond was five times oversubscribed on March 6th.

Borrowing makes sense for poor countries if it finances things like roads, schools and hospitals, which improve welfare and support economic growth. But the keenest borrowers in Africa are also feckless spenders. Take Ghana, which racked up debt as it ran an average annual budget deficit of 10% from 2012 to 2016. When a new government entered office last year, it found a $1.6bn “hole” in the budget. The new chairman of the state cocoa board found that a $1.8bn loan meant to fund cocoa production in 2017 was “all gone”.

Ghana got a three-year loan of $918m (Sh91 billion) from the IMF in 2015, ensuring a degree of transparency. Commercial loans are easier to hide. In Mozambique, three state-owned companies borrowed $2bn (Sh200 billion) in deals arranged by European banks. Most of this was done in secret. The proceeds were squandered on overpriced security gear and a bogus fleet of trawlers. An audit could not trace $500m (Sh50 billion). The once-buoyant economy sank and Mozambique defaulted on its debt last year.

A study of 39 African countries from 1970 to 2010 found that for every dollar borrowed, up to 63 cents left the continent within five years. The money is often siphoned out as private assets, suggests Léonce Ndikumana, one of the researchers, based at the University of Massachusetts, Amherst. Some banks seem more interested in juicy fees than good governance.

China’s involvement in Africa has made it harder to assess the situation. Countries such as Zambia and Congo-Brazzaville have taken out opaque loans from Chinese companies. Angola has borrowed more than $19bn from China since 2004, mostly secured against oil. Such loans often have built-in clauses to review repayments as prices fluctuate, says Deborah Brautigam of the China-Africa Research Initiative at Johns Hopkins University. But there is little precedent for restructuring Chinese loans. Nor is China a full member of the Paris Club, which co-ordinates the actions of creditors when things go wrong.

Though much of the money borrowed by states comes from foreign investors, some is provided by local banks. They find it easier to buy government bills than to assess the reliability of businesses or homebuyers. Moody’s, a ratings agency, estimates that African banks’ exposure to sovereign debt is often 150% of their equity. So a sovereign-debt crisis could fast turn into a banking one.

Disaster can still be averted in most African countries. Abebe Shimeles of the African Development Bank warns against sudden spending cuts, which would leave half-finished infrastructure projects to rust. Research from the IMF suggests that the least costly way to deal with fiscal imbalances in Africa is to raise meagre tax-to-GDP ratios, which have crept up by just a couple of percentage points this century.

Other proposals aim to make lenders share more risk with borrowers by, for example, linking interest payments to growth or commodity prices. Some suggest changing laws in America and Britain, where most debt is issued, so that countries are not liable for loans agreed to by leaders acting without due authority. Organisations such as the IMF could be more robust, speaking out early when countries seem to be in a downward debt spiral.

As it is, the costs of bad borrowing rarely fall on leaders or their lenders, which often makes politicians borrow (and steal) more. “It’s the common man that actually bears the brunt,” says Bernard Anaba of the Integrated Social Development Centre, a Ghanaian advocacy group. The people of Chad, now paying for Mr Déby’s foolish bargain, would surely agree. ^ (The Economist)