A case of fool’s gold

Sometimes we buy things and immediately regret that choice. It is an example of post-decision dissonance, when a person becomes stressed by a decision and seeks to mitigate the resultant discomfort. The buyer may change behaviour, feelings, or even how they look at themselves. The more resources and time invested into making a purchase is directly proportional to the level of buyer’s remorse, and/or psychological discomfort.

There are different levels of buyer’s remorse. On one end is a person who buys a phone or dress on the streets which they believe is of a quality of their desire. It is packed well but on reaching home, the package turns out to be very different from what they saw in the beginning.

Another case is you buy a product of a brand you trust from a credible outlet; on reaching home the performance of the product is way below what you expected. The former is devastating, the second is rather subtle but upsetting as well, because it means spending money again on a better product.

This is where Nairobi residents currently find themselves. The poor supporters of Sonko are smarting from the former, and the affluent side from the latter.

Sometime last year, informal traders who ply their trade on the part of Dunga Road leading to the footbridge over Kenya Railways rails into town woke up to a double surprise. In the middle of the night, unknown people descended on their temporary shelters and flattened the whole area. The land had purportedly been allocated to a city tycoon by Governor Evans Kidero. 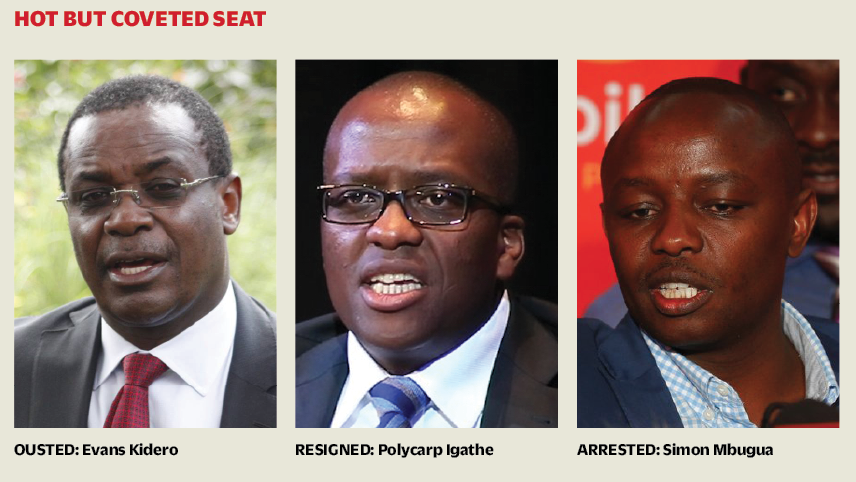 By mid-morning, Senator Mike Sonko had sent a truck with building materials and money for the traders to put up new structures and jump-start their businesses. It was a tale of death and resurrection but which would play again a year later, with a bitter results.

Mike Sonko was the darling of the city’s informal settlement dwellers. My friend, a cobbler, was a die-hard Sonko supporter. Before elections last year, my attempts to sway him away from his choice were futile. Going into the elections, Sonko had become a favourite to win the Nairobi governor’s seat.

His supporters claimed he is a caring leader who is generous to a fault. The Sonko Rescue Team, which had ambulances, hearses, limousines and trucks, was at the people’s disposal for their weddings, funerals and other needs. If Raila was the peoples’ president, Sonko was his deputy.

Sonko dragged an untamed personality and bad boy image into Kenyan politics. His ascent from a mysterious street character in Nairobi’s Eastlands to Makadara Constituency MP, Nairobi Senator and now Governor is like fine make up on a character that does not deserve the rise.

There were questions about the source of Sonko’s money, which he dished out like a new billionaire in town and funded his Sonko Rescue Team. To date nobody knows the source of the money that funds his flashy lifestyle.  Then there is the matter of Sonko serving eight months of a five year jail term where he said he met self-proclaimed apostle James Ng’ang’a. If “it looks like a duck, walks like a duck and quacks like a duck, then it’s a duck”.

After clinching the Jubilee party ticket, Sonko picked Polycarp Igathe, a suave technocrat who left his job as chief executive at Vivo Energy, to be his running mate. A man of modest education and a history of criminal conviction, he said that he would handle the political side of governance while his deputy would take care of administrative matters.

He had found a way to skirt around his weaknesses. Sonko even chided Dr Kidero, a pharmacist and the ODM candidate, for not doing much with his good academic and corporate governance credentials.

He went on to win the seat but soon Nairobians realised that Sonko the hawker had cheated them by packing for them tattered clothes in their evening rush to beat the darkness in the streets of Nairobi.

In January this year, four months after being sworn in, Igathe resigned, because he had “failed to earn the trust of the Governor to enable me drive Administration and Management of Nairobi County…” The full reality of the poor choice Nairobians had made was dawning on them. The money, emotions and time people had invested on Sonko’s candidacy was coming back to haunt them.

Immediately after Igathe’s resignation, word leaked that former Kamukunji MP Simon Mbugua is the man behind Sonko’s ascendancy. Members of the County Assembly petitioned Sonko to substantiate the role Mbugua, a member of East African Legislative Assembly, was playing in his administration as he was a common feature at City Hall.

Sonko had promised to work with Igathe but brought in Mbugua instead. Those who know Mbugua know that he is cut from the same cloth as his friend Sonko. Nairobi had jumped from the frying pan into the fire.

In March this year, my cobbler friend and his colleagues woke up to another surprise. Their stalls had been turned into a heap or rubble. They were optimistic that now that their man was in City Hall, another truck would arrive by midmorning; they are still waiting.  They were deluded, and now operate in the open on a road reserve that runs down to Lusaka Road. Their trips to City Hall have yielded nothing; in fact, they are now divided on account of bribery and counter bribery allegations. Needless to say, they have given up.

Sonko’s failures are well documented: the Central Business District is as full of hawkers as it is of garbage. Matatu crew are still as mad as they have always been. Raw sewage spews onto the road in many areas while his most cherished discovery of quick pothole repair is yet to bear results.

The rains have exposed the city’s nightmarish drainage tale. Violent and petty crime has soared. Our governor is clueless. To the impassable roads, he asked city residents to use handcarts to cross flooded sections.

There is a big difference between being simple and being simplistic in one’s judgment. Sonko had portrayed himself as a simple man who could identify with the struggles of the common man.

But behind that simplicity to win the people’s support was a man averse to long-term solutions to the common man’s problems. This has pushed him to come up with simplistic solutions that prove true Mukhisa Kituyi’s famous line of one “lacking substance between his ears”.

Apart from his asinine handcart solution, repairing potholes is also simplistic. Bad roads need re-carpeting and proper drainage to ensure pools don’t form to eat away at the tar. The logic of a new patch on an old cloth has never been a solution as in Sonko’s own words – back when he used to criticise Kidero, “water will seep in along the boundary of the patch and wear out the patch.” It is evident to Sonko that philanthropy and leadership are related but one cannot be a substitute for the other.

When Sonko announced his candidature for Governor, I was apprehensive because Jacob Zuma in South Africa had taken power like a duck to water but was now like a dying duck in a thunderstorm. Zuma, like Sonko, lacks intellectual muscle. They are both populist. Zuma was recalled by the ruling Africa National Congress and forced to resign as president due to corruption and incompetence. Education is not a prerequisite for great leadership as people like Paul Kagame have proved, but lack of education requires astute leadership skills to compensate.

Sonko told us that he acquired a degree certificate from Kenya Methodist University. There is something education puts in someone that you cannot miss. We have seen what formal education has done to Julius Malema in South Africa. There is a significant difference between the Malema of ANC Youth League and the leader of Economic Freedom Fighters. In this regard, Mike Sonko’s degree is a lie, a mere paper.

As it is, Nairobians must find ways to cope with acute buyers’ remorse. Sonko may not have caused the problems of this city but he does not have the substance to provide solutions to the same. He has no capacity to spoon feed the poor while the people who were to cater for the need of the middle class are running away from him.

Sonko was a wrong choice and the people who backed him have realised that not all that glitters is gold. The man at the helm at City Hall is a typical case of fools’ gold. May 2022 come running; we can’t wait. He has said that he will not defend his seat. (