Errant natives, obsequious comprador and the question of imperialism

“I was born here!” shouted the native, claiming jus soli.

On March 26, 2017, the world watched an incident at the Jomo Kenyatta International Airport that revealed the incorporeal prison grid that is the Westphalian nation-state geopolitical system.

For both the ignorant and informed, the Miguna Miguna deportation debacle exposed fundamental contradictions that are intrinsic to the Westphalian nation-state system.

“I am a Kenyan…Jus civile!” demanded the colonus, while meaning jus naturale, while in an actual state of jus gentium – claiming jus civile where no state even exists.

“I am JaLuo”, directed at the JoLuo Ruoth would have been more conceptually consistent though impotent. Given in our coloniality, we have obsequiously embraced inane oxymoron like “negative ethnicity”, at once de-legitimising our own “larger families” and compelling submission to colonial abstractions like “Kenya”, which are defined and redefined at will by the imperialists, as we witnessed in Sudan and other regions of the world. An example is the current re-engineering of identities in the Middle East through the Greater Middle East Initiative (GMEI), which is re-mapping the old and worn genocidal British-French Sykes-Picot colonial order of the 20th Century in America’s sociopathic imperial image.  The cry, “I am JaLuo”, would, sadly, not only have been impotent but also politically incorrect.

One is only allowed to identify with the identity imposed by the imperial colonialists; any other is met with ridicule at best, and the potential danger of political lynching for “tribalism” by fellow serfs, at worst. No-one dare shout “I am ndorobo!” (the small ‘n’ is deliberate) on an international stage, where when Phil Neville says “I am British and proud” – his ethnicity is not only acceptable but is also recognised institutionally and procedurally. White ethnic identity has citizenship, in fact sufficient jus civile to cater for any whom the white power structure would deign to grant use of their ethnicity i.e. an Arab and Somali can say they are British without fear of contradiction while the reverse would be preposterous.

With this simple “sleight of hand”, the imperialists can enjoy citizenship in expropriated lands where they do not belong. They have created political aberrations like “Kenya”, which enable contradictions that sustain a system that keeps the native inhabitants of colonies and occupied territories from enjoying the rights of citizenship in the suzerain’s homeland, while allowing the imperial citizen to enjoy rights in the occupied land as in his own.

The colonial political identity structure Mahmood Mamdani effectively described is based on the melanin phenotype. Rights belong to Imperial citizens and subjects. They occupy the superstructure, whites at the top as citizens and light-skin browns at the bottom as subjects. Natives occupy the substructure as a large muddy brown to black muck, with no rights, only privileges. 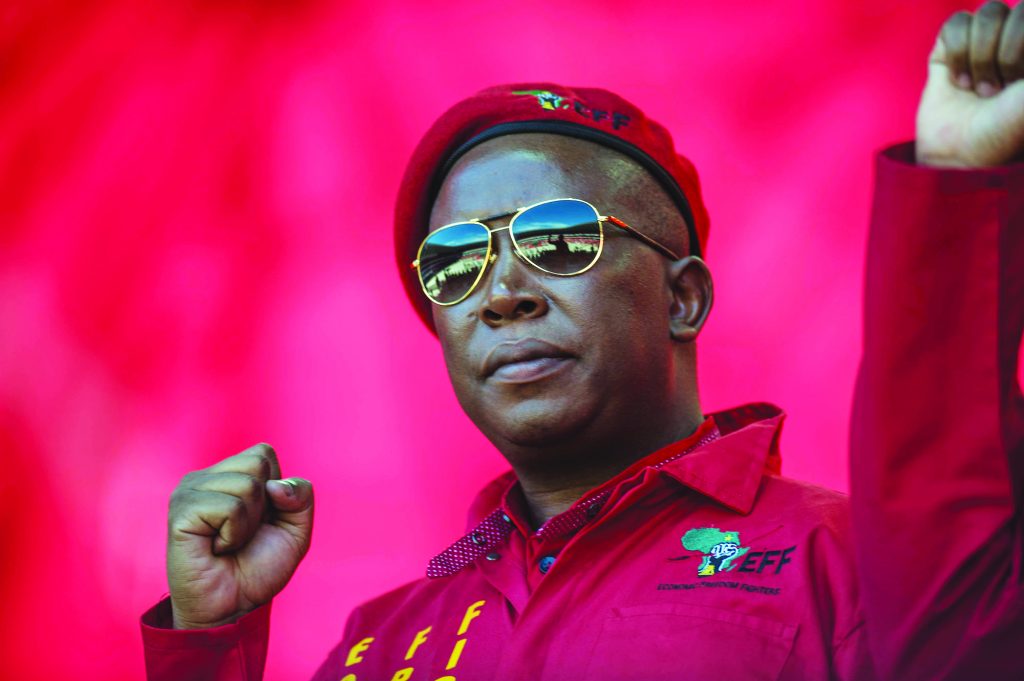 Simply put, the right Miguna demanded was a right of being a Luo to the Luo Nation. He was demanding this natural right from the un-natural entity of a colony which itself masquerades as a State and therefore has in essence no citizenship to offer, anyone.

“I am a Kenyan!” repeated the peregrine, now desperately using any and all means of identity available jus coloni, jus soli in order to be granted access back in to the “Kenya” province of the Empire, not knowing neither civile nor gentium exist for the natives.

He demanded to be allowed back in to the field. He had realised that, though being a field Negro was wretched, being amongst his fellow slaves consolidated his identity and reinforced his esteem and sense of self, compared to living in the lap of the master where there was all comfort, but total deontological corrosion.

Why was he now seemingly rejecting the safety and security of his master’s house? In exchange for what, we dare ask? The Negro had tasted life. The field promised fame, power, and relevance he could never enjoy in the master’s house, which though comfortable was cold. Nothing beyond the comfort was real. Man was not created to live in the comfort of another man’s house. It is not natural, not for any Man, only for a slave.

The fields though harsh are real, hardship strips masks, revealing us to ourselves, giving rise to struggle, struggle to meaning, meaning to purpose, purpose to life.

The life the Negro had tasted.

“I am a Lawyer!” exclaimed the plebeian in patrician outrage. Shocked by the treatment meted out on him by fellow members of his own underclass.

Neither being “born here” (wherever “here” is), nor being a Lawyer, nor being “Kenyan” entitled the poor agitator to anything. In actual fact, being “a Kenyan” his greatest defence actually qualified for the greatest subjugation. As being a Kenyan unlike being a Somali or a German, was the actual slavery.

According to the Kenya Gazette Supplement No. 93 of 7th December 1960, the term “Kenya” means, the colony and Protectorate of Kenya Crown Land. What is the “Kenya Crown Land”? It rises from the Crown Lands Ordinance (C.L.O) of 1902. That is how.

Gun ownership is organically related to political agency. Gun ownership in the sense of right to arms is fundamentally integral to citizenship. The “Gun control” controversy the world has witnessed in America is not about the civilian attacks conducted by deranged gunmen that the main stream media so loves to amplify.

It is about political agency. The American people having an instinctive sense of the true essence of slavery having been both subjects and slave owners, and now FREE MEN. Americans deeply understand that “gun regulation” is subjugation.

Only chattel slaves are not allowed to own guns. Natives.

Let’s flash back to the Westgate incident. The Asians who, out of nowhere, filled the parking lot, bore a “strange” arms configuration – semi-automatic and automatic weapons, for local citizenry.

No organized group of native civilians is known to be armed in this way, not even in private security companies.

These Asians form the lower rung of the race superstructure of Imperialism. Prof. Mahmood Mamdani terms them “the subjects”. They too have rights, but subject to regulation by the Caucasians above them.

In a material system like Secular Democracy, where the logic of power is the criterion of rule i.e. “might makes right”, citizens guarantee their rights from the sovereign, their rights are NOT guaranteed by the Sovereign.

The right to ownership of arms is not manifest in the “Firearms license”, local drug dealers, elected natives and other petty bourgeois like flashing at restaurants, when not terrorising family members and competing lovers with.

It is manifest in the ability to exercise defensive power against an organized expropriator in the form of a rogue government. Why did the United States Government blink? Why not another Waco?

One has to understand how the white horizontal rungs intersect with the columns of the global property rights regime to create the power structure that Imperial elites depend on to subjugate the World. It is in this interstice that Cliven Bundy made his stand.

The United States Government could not de-legitimise Bundy as a fanatic like David Koresh and neutralise him, given first, his call was patriotic, and second he is a “White” “property owner”.

Patriotism is the call the US Government uses to raise cannon fodder for its imperial wars around the world.

Such contradiction would have endangered the false basis of its existence with exposure i.e. it’s “Protecting Freedom around the World” mask would have fallen.

Given second he is White and owns Property, his execution would have potentially undermined the power structure that the imperial elite depend on to subjugate the entire world.

This is why the Imperial US Government, owner to a standing military of a million plus clones, nuclear submarines, carriers strike groups, nuclear and ballistic missile arsenal unrivalled by any other power (now and in history), X-37B robotic space plane and the HTV-2 hypersonic glider prototype, when confronted by a small band of armed, white, property owners, blinked.

Had “the people” owned arms in England during the expropriatory “Enclosure” policy (essentially robbery of land by the elites), the history of the entire World would probably be different.

Guns matter. Raising the question, how does the other errant native – the real General, Julius Malema – intend to accomplish his mission?

Simply put, what is your new “post-expropriation” world order? Where are your guns?

The Queen of England massacred natives around the world, tore up their communal order and instituted Secular Imperial Colonialism in the form of “In-direct Rule”. For the masses who collaborated, the Queen promised transcendental real-estate by Christian conversion.

For the elites who collaborated, the Queen granted English as a Language, token real-estate and a place in her administration overseeing the other natives.

For all others, her soldiers torched their villages, mowed down men, raped and killed their women and children of all ages, pogromed and interred their entire tribes and nations into camps and reservations where she would starve them into submission and death.

What is your source of authority Julius Malema? What imperium will you leverage to execute track 1? What framework will you use to phase-in to track 2?

Or are you Jean-Jacques Dessalines, whom after successfully stamping out resistance through the Haitian revolution of 1804, then sought to re-engage his nation to the same Imperial system that gave rise to his oppressors? This was repeated more recently through Democratic process by the Muslim Brotherhood in Egypt.

A journey of blood tears and sacrifice out of Misr literally, then right back in to the arms of Firaun.

While vengeance is sweet, right, and just, it is only linear at individual level. At sociological level it is evolutionary. The sequence of events in relation to cause and effect only move in one direction along the timeline. A simpler but poor analogical example is in contracts of kinship one marries then divorces, not un-marries.

The failure or inability of the natives to successfully defend their land or conduct a revanche created a new reality, which cannot be altered by the same political praxis that created it.

Iraq and Afghanistan cannot remove the Imperial occupier through Secular Democracy; this is a matter of ontology. Somalia cannot remove the America’s proxy occupation – AMISOM by the method of invitation which it presumably used to create it.

Vulgarly equivalent is “raping the rapist” or “murdering the murderer”. It is a completely new, different, separate action/event in the continuum of life.

The purpose here is to create and share a template that can help understand and discuss the nature and consequence of this line of action. This submission is not advice to “do or not do”.

What for Mzansi, Julius Malema? What is your promise for Mzansi?

Melanin will not cut it as the Khoisan lady at your Cape Chamber of Commerce debate with Clem Sunter showed. To succeed, you must establish a new sovereign, then lead. Do not shed human blood in vain.

To the Queen and upstart Imperial interloper into the “Queenwealth”, the 2nd Republic, reveal yourself! Let your governed have a true appraisal of their status, be it of subject or native, serf or slave. Be an honest Imperial Master, as Rome was before you. (