In less than three months, Kenya’s premier media organisation, Nation Media Group (NMG), has lost close to 80 per cent of its key journalists and columnists to its rivals.

Such a mass exodus of professionals from one entity is unprecedented in the history of the Kenya’s media. So what is happening at the Nation Centre?

For a media house that is known for its rather cold-hearted poaching of good journalists from other media houses, the shoe is now on the other foot as the media giant appears to falter, with its star journalists scrambling out as if the house were on fire.

Gloom hangs in the air at the converged newsroom on the third floor of Kimathi Street’s most famous address, as both journalists and managers wonder who would be the next to walk out of the  grand “House the Aga Khan build” in the early 1990s as a testament to the NMG’s dominance of the regional media business.

While NTV, the media company’s TV station, has haemorrhaged all its familiar faces – Linus Kaikai, Jamila Mohammed, Victoria Rubadiri, Larry Madowo, Pamela Asigi among many others – the newspapers have lost not only their best news journalists, but also their most outstanding columnists.

Already, the effect of the departure of the media group’s best men and woman is being felt, with the quality of news falling further behind the competition.

The group’s newspapers have now become infamous for a low-brow, unethical form of journalism derided by teachers of journalism as “vendetta journalism”.

The editing standards have slumped, with embarrassing typos sticking out of editorial pages everyday like sore thumbs, to use a cliché.

So what has happened to the once revered media house?

Journalists are unequivocal: Nation’s editorial management has fallen in the wrong hands with intolerance, partiality, corruption and selfish interests taking precedence over the duty to inform.

Self-serving editors (fingers are being pointed at two senior ones) have captured the media group and woe unto the journalist that dare cross their path.

Unable to stand the unethical and unprofessional behaviour of the two condescending men, referred to as “the two musketeers”, conscientious journalists are walking out in droves.

Those that would not conform to the whims of these two men are being pushed out under the guise of restructuring, which at the Nation is euphemism for victimisation.

Insiders are clear that the retrenchments are used by managers to victimise employees they hate or who would not entertain unethical and unprofessional instructions from compromised editors.

The shenanigans at the Nation is evidence that the biggest threat to media freedom in Kenya today is not the state or the corporate world, but senior editorial managers who have sold the soul of the media to the highest bidder.

Every journalist now knows that some editors, especially those of the publicly listed media houses, have captured their respective media and are using their influence for personal gain, mainly by supporting the political elite of the day in exchange for material favours.

It is common knowledge that quite a number have joined the league of “tenderpreneurs” – people who use influence to secure government tenders for which they are overpaid.

For instance, everyone at NMG knows that at least two editors have benefited immensely from government tenders over the last one year, making them join the ranks of the rich. According to a journalist who spoke with The Nairobi Law Monthly, the Editor-in-Chief holds controlling shares in 360 Degrees Media Consulting, together with MKU founder Simon Gicharu, which, along with Oxygene PR, are said to have been the local partners of Cambridge Analytica.

Through them, Cambridge Analytica developed online media campaigns that portrayed Raila Odinga as a blood-thirsty individual who is also sympathetic to Al Shabaab and having no development agenda. On the other hand, Uhuru was portrayed as being tough on terrorism, and being good for the economy. The said editor has since won lucrative government tenders in the communication sector.

These shenanigans have attracted the eye of NMG’s majority shareholder, the Aga Khan, who, a couple of weeks ago deployed a special team from Aiglemont Estate, France, to probe activities in Nairobi.

Aiglemont Estate is the global headquarters of His Highness The Aga Khan and it is the seat of the Board of Directors that oversees his businesses around the world.

As a businessman, the Agha Khan is gravely concerned about the company’s performance and has reportedly been asking very tough questions.

It is not clear what the special team has recommended but it is widely expected that senior heads will roll. As an indication of things to come, one of the group’s more honest editors, Eric Obino, who had been elbowed out for refusing to toe the line of the “musketeers” was recently reinstated.

The mess created in the editorial department of NMG has, naturally, negatively affected the company’s books, with financial results for last year showing a huge drop in earnings.

The media house recorded an embarrassing 20 per cent drop in profit before taxation last year, earning a disappointing Ksh1.95 billion, from Ksh2.46 billion in 2016. Consequently, the share value has tumbled from about Sh300 to about Sh100 today.

Despite last year being an election year, which is usually a good season for media, both advertising and circulation dropped. Advertising revenue dipped by more than 40 per cent while there was an almost 50 percent drop in circulation. 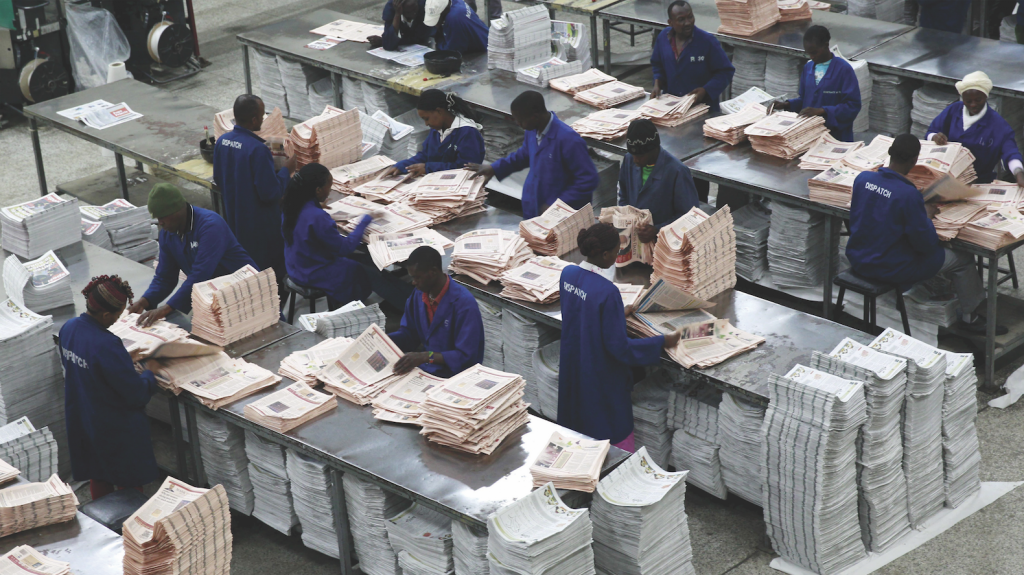 The media group is reaping what it has been sowing for a while now. Kenyan consumers of media are a fairly sophisticated lot who have no time for a sloppy, dishonest news media. Consequently, they have taken their eyeballs and their money elsewhere.

Some have already relocated to the Standard, Nation’s main competitor, whose fortunes have soared since the appointment of Joe Odindo, one Kenya’s best editors, as editorial boss. Their readers have followed suit.

“We are aware that the singular privilege to contribute comes with the tacit compact to promote and protect intellectual freedom, freedom of expression and freedom of information, which anchor freedom of the media,” they said as they departed.

At one time, there were rumours that President Uhuru Kenyatta was planning to buy the majority stake from the Aga Khan and that some NMG managers had been briefed to deliberately bring down the publicly listed company so that the president could buy it on the cheap. However, the NMG management later clarified that the Aga Khan did not plan to sell his shares.

Kenya’s democracy is evidently on the decline and the media have contributed immensely to this lamentable state of affairs. As the institution placed in the unique position to safeguard democracy, media’s performance over the last few months has been very disappointing.

Like fake preachers, media (or individuals within it) have abused the trust people have in them to promote either their selfish interests, or the interests of people in power. While NMG stands out because of its position and reach, the others are not innocent either.