Julius Malema: the man, his mission and destination

It is a rare spectacle. It is the kind of thing you would not imagine in the House of Commons, US senate or even the Kenyan Parliament.

This is in stark contrast with their competitors who dress in crisp suits or flowing dresses. The choice of dressing by the members of the Economic Freedom Fighters is calculated to reflect the much-criticised idealism that they embrace. They have packaged themselves as the voices of the poor and marginalised, the dejected masses, and the unemployed, low-wage earning workers.

Their frequent ejections from Parliament during state of the union addresses and confrontations with House presiding officers are now part of the South African legend.

But their devotion to mission, clarity of vision and targeted energy is as profound as it is unmistakeable.

Their activities revolve around the party’s radical agenda: the eight non-negotiable cardinal pillars which include land expropriation without compensation, nationalisation of privately-owned banks and mines, free education and housing, and economic freedom.

They are small, but significant barrels of academic ink is being poured to dissect the Economic Freedom Fighters’ contribution to South Africa’s post-apartheid political narrative.

The EFF detests what it has christened “white monopoly capitalism,” and are pushing for a “moral regeneration and radical economic transformation” of post- apartheid South Africa. And to lead this process is 38-year-old Julius Sello Malema, popularly known as “Juju”.

But does he have the temperament and the judgment to succeed?

The overriding grievance is that despite more than two decades of independence, majority of black South Africans remain landless, lack solid education, housing and live in want. These were the prime pillars of the 1994 Freedom Charter.

The economy remains largely in the hands of the White minority. This has renewed emotive demands for wealth redistribution, an agenda the Malema party is noisily prosecuting with vigour.

Malema has been calling on black South Africans to occupy idle land in the hands of Whites as well that held in trust by traditional leaders such as king Goodwill Zwelithini of the Zulu. The King has promised war.

The Afrikaner Boer farmers who own vast swathes of land have been indignant, evoking comparisons with the infamous Zimbabwe land seizures. 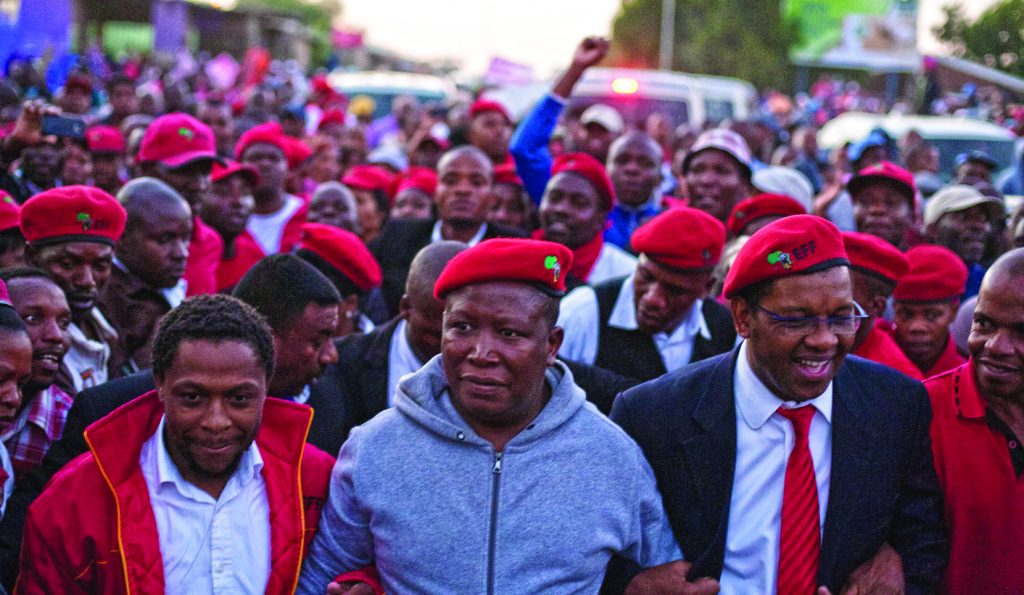 The EFF proposes that all land be reverted to the state for redistribution without compensation for the white owners. “We are calling on whites to surrender land and minerals resources they hold because when they came from Europe they did not carry any land into South Africa,” he says.

The economy remains largely in the hands of the White minority. This has renewed emotive demands for wealth redistribution, an agenda the Malema party is noisily prosecuting with vigour

The counter-argument to this radical demand has been that it will not only be unconstitutional, but will also affect food security and probably trigger an uprising with more than considerable political ramifications. Opponents of land redistribution look to Section 25 of the South African Constitution, which states that nobody should deprived of private property. Malema’s position is that the Constitution must be amended.

A couple of observations suffice here.

One, the land issue resonates well with a vast majority of black South Africans, especially youth (this is a critical constituency that EFF seeks to pull out of the ANC). It one of the EFF’s eight non-negotiable cardinal pillars.

Two, the governing ANC is largely blamed for inaction or collusion over land redistribution. Malema has been consistent in his argument that former presidents Nelson Mandela and Mbeki “sold out” on land. He has also accused Jacob Zuma of being “cagey” on this emotive issue.

And there are strong indications that it could cost the liberation movement significant support in the 2019 elections unless it takes the wind out of EFF’s sails.

That is why a reluctant ANC – which initially favoured the willing-seller-willing-buyer policy which has failed spectacularly – has succumbed to sustained EFF pressure. The party under President Cyril Ramaphosa, has recently passed a resolution for expropriation of land without compensation.

And, at the instigation of the EFF, the South African Parliament has adopted motion allowing the redistribution.  This is no doubt a major victory for the economic freedom fighters.

Significantly, largely due the EFF, the land issue has driven South Africa to a constitutional moment.

The country is currently engaged in a robust public debate that could lead to an amendment of Section 25 of the South Africa Constitution to allow for expropriation of land without compensation in “public interest.”

The process is calculated to give the process public endorsement and legal justification.

But is the EFF, with its pugilist populism, a threat to the liberation movement?

The answer is Jacob Zuma.

Initially seen as an irritant party made up of youth activists that would fade away, the populist the formation with 25 MPs has transformed the nature of discourse in South Africa’s political spaces.

Wresting power out of the ANC could be a long shot, but it is certain to eat into its base in elections next year. More critically, the young party, which was founded by youth that had been kicked out of the ANC, has succeeded in placing critical issues on the table – ranging from land, education, housing and corruption.

The EFF was central in exposing the corruption in the Zuma regime that eventually led to his ouster. Following the exposé that Zuma spent public resources to expand his private residence, the EFF moved to the South African Constitutional Court, which ruled that the President had violated his oath office and the Constitution. The court then ordered Parliament to take action against the President. The EFF had a whale of a time humiliating him whenever he attended Parliament.

The irony of Zuma’s disgraceful exit and Malema’s involvement is no-brainer.

Zuma used Malema to lead a plot to remove Mbeki over lies that the latter had orchestrated a plan to cling to power. The then ANC youth leader would aggressively campaign for Zuma’s ascension to power, at one point making the controversial declaration that he “can take arms and kill for Zuma.”

Afterwards, the fiery surrogate would differ with Zuma for his controversial demands for expropriation of land and nationalisation of mines. Malema would then be kicked out of the ANC, after which he swiftly formed the EFF.

Notably, Malema has since apologised to Mbeki for allowing himself to be misled by Zuma. Rough-edged, youthful, scheming, biting, and often accused of being disrespectful, the 25 MPs led by Malema have been a proper pain for the governing ANC.

They exposed the unholy alliance between Zuma and the Gupta family, inspired successful countrywide student protests for reduction of school fees as well as led campaigns for the compensation of widows of miners killed by police in Marikana.

True, Malema is a polarizing figure who attracts admiration and resentment in equal measure. To his admirers, he is the embodiment of the dreams of many young South Africans— mostly uneducated and poor— struggling to re-assert their place and voice in the post-apartheid era.

They say he is a brave maverick who speaks truth to power, with the potential of being a future leader and influencer. To his critics, he is a dangerous demagogue, a violent, antagonising and immature charlatan who is exploiting poor youth for political gain. They accuse him of leading a luxurious life while he purports to speak for the poor.