Where people and government intersect

He speaks softly and pauses to listen whenever he is interjected, qualities someone speaking with him for the first time, more often than not, may mistake for weakness.

Professor Kivutha Kibwana listens more than he speaks. And he lends an ear to just about everyone and everything, picking along the way valuable lessons and insights that a majority, especially those in his academic and political class would have no patience for.

Behind the façade lies a meticulous, unassuming human being who hardened in the trenches of the struggle for multiparty democracy in the 1980s and 90s against former President Moi’s strongman regime.

While at the university, he was also active in civil society, particularly from around 1988, when he worked with many people in the Pro-democracy movement. It was in these two fields, academia and civil society, that Kibwana cemented his beliefs in people-centred governance, and envisioned a government that entirely worked for the people.

While working at the Centre for Law and Research International (Clarion), a group he started in 1993 with other university lecturers as a research organisation providing opportunity for scholars to carry out research away from the prying eyes of the state at a time when activities within the universities were highly censored, Kibwana developed important capacities in research, public education and advocacy. Clarion was registered in 1994 as an NGO.

Research, in particular, carried him to all corners of the country, gathering ideas from people from all walks of life, ensconcing even more his belief that people participation is the hallmark of development. Out of this, the good professor and his colleagues in the struggle wrote a lot on corruption and good governance.

“The thing about both academia and civil society was that we were trying to lay a foundation for a good Constitution, good laws, even an ethical framework for our country. Generally, even when it was difficult, it was very fulfilling,” he offers.

In 2003, the professor of law decided to get into politics “to follow the Constitution now that it had gone into Parliament, to be part and parcel of the process of getting it passed.” It was, he confesses, not easy.

He served as Member of Parliament for Makueni, as an assistant minister and minister for Environment and Natural Resources, and also for Land. When he lost his Parliamentary seat in 2007, he served as President Mwai Kibaki’s advisor for Constitutional, Parliamentary and Youth Affairs.

Makueni County, therefore, was lucky to get as her inaugural governor not just a well-groomed man but also a well-grounded academic, manager and a people’s champion. Unfortunately, as it became clearer immediately after forming his first government in 2013, the MCAs had no clue who they were dealing with. Most likely, they were cheated by the Professor’s humility and took him for a pushover. Little did they know that behind the persona was a resolute spirit with a pre-set vision and growth trajectory that not even an entire Assembly could sway.

They, the Governor says, demanded to be given…

…To read the rest of this interview please get a copy of The Nairobi Law Monthly. Available in leading supermarkets and newspaper vendors near you. Or call 0715 061658 to make a director order. Delivery is free within the CBD and its environs. 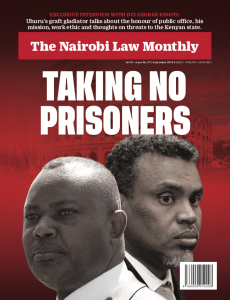