Last month, the Firearms Licensing Board (FLB), the premier private firearms regulatory body, cancelled the licenses of all gun dealers and shooting ranges countrywide in a quest to control use of weapons.

In a move seen to have been effected at the behest of the National Intelligence Service, all licenses for the twenty-one registered gun dealers and shooting ranges where all licensed individual gun holders practise, were suspended forthwith.

Meanwhile, the FLB moved the Central Firearms Bureau (CFB) from Nairobi Area to Mandera Road in the leafy Kileleshwa suburb, as it initiated efforts to streamline issuance and management of firearms and ammunition in the country.

An intelligence brief shared with the President indicate the country’s security agencies had raised concern about the ballooning number of licensed firearm holders through a sub-par vetting process, raising the possibility that parallel licensing has been going on for a while.

The brief says that gun dealers have taken to conniving with CFB staff to collect huge bribes from prospective firearm holders to “assist” them obtain firearm licenses, in the process frustrating the chances of any applicant who doesn’t not go through them.

The cartels have reportedly been taking as much as Sh1 million from applicants to facilitate the issuance of licenses. Investigations have revealed that individuals with questionable character have been acquiring licenses and firearms without necessarily going through the due process.

Sources privy to the cancellation told the Nairobi Law Monthly investigations began after revelations of abuse of office by a senior officer attached to the CFB. Within the brief period he held office, he issued seven gun dealer and shooting range licenses in exchange for bribes amounting to Sh13 million.

When it was discovered, government hurriedly closed the CFB and moved all officers to other departments, before reopening it in Kileleshwa and appointing new office bearers. The seven licenses were subsequently suspended and dealers required to reapply to undergo proper vetting.

In normal circumstances, prospective firearm holders are subjected to a rigorous vetting and scrutiny, in a process that begins with the submission of an application at the Officer Commanding Station’s (OCS’s) offices and Central Firearm Licensing Bureau who then submit the application to the Inspector General of Police for approval.

The OCS is supposed to forward the application to the OCPD, who in turn must convene a meeting of District Intelligence and Security officers for review before it is sent to the county commander for approval.

Also raised in the brief are reports that criminals have found a way of obtaining ammunition from shooting ranges, where gun owners go to use their cache of bullets before they expire. The report establishes that there is less accountability at shooting ranges than there ought to be.

The intelligence community is especially worried about the… 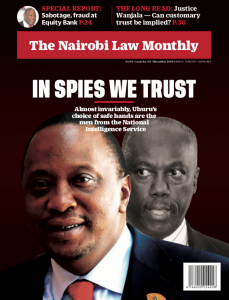