Banks to maintain profits even as business conditions remain difficult

Anew Bank Outlook report by credit rating agency Moody’s shows that although banks will maintain solid capital and liquidity buffers, macro conditions will remain difficult in the majority of African countries. According to the report which was released on 12th December 2017 , despite showing improvement, economic growth will remain below historical levels, while political uncertainty will dampen confidence and governments’ capacity for fiscal stimulus will be limited.

The report identifies several high risk contagion channels for banks such as large holdings of government securities, which link their credit profiles to that of their respective sovereign authorities’ reduced capacity to support banks in case of need, and asset quality pressures. South African, Kenyan and Tunisian banks are expected to be most affected by these conditions, while Nigerian, Moroccan and Egyptian banks are expected to fare better.

Specifically, the report projects GDP growth to rise by 3.9% in the 2018/19 fiscal years, up from 3.1% in 2017E) – driven by the higher oil prices and easing of drought conditions – yet remain below potential and levels required to increase employment and per capita income. Operating conditions will, however, remain challenged by elevated debt levels, compromising government capacity for fiscal stimulus, and political uncertainty, dampening investor and consumer confidence. 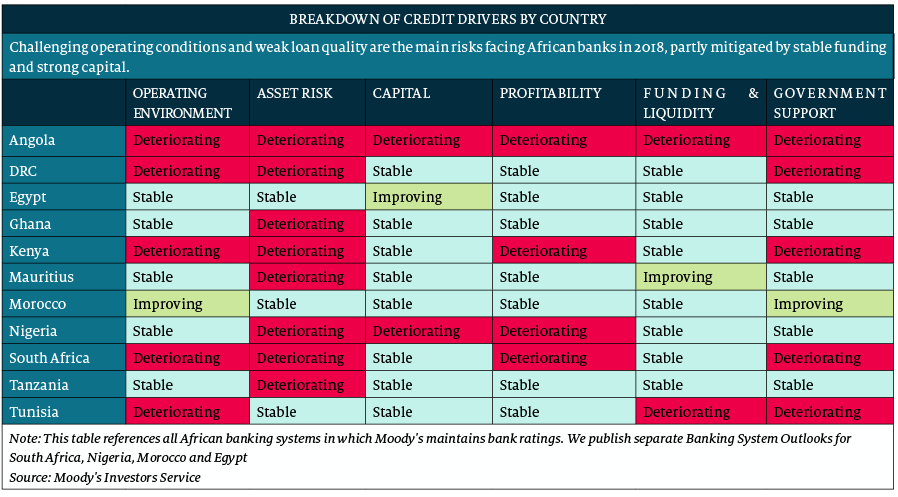 This is expected to directly impact banks’ credit profiles via three main channels. First, the banks’ large and increasing exposure to government securities – typically over 1.5 times their equity – link their credit profiles to that of the sovereign. With numerous banks’ baseline credit assessments (BCAs) on par with the government ratings, any downward pressure on the sovereign ratings stemming from challenging operating conditions would have a knock-on impact on the banks. Secondly, reduced capacity of governments to support troubled banks would adversely affect banks whose ratings benefit from government support uplift.  And finally, problem loans will edge higher as ongoing structural issues expose banks to unexpected shocks. However, gradual GDP growth suggests that NPLs will peak in 2018.

It’s not all loss and gloom though as banks’ other key credit drivers and financial metrics are expected to remain resilient. For instance, banks’ capital buffers will be maintained reflecting their low balance-sheet leverage, while profitability will be stable as high provisioning charges will be compensated by revenue/credit growth in line with nominal GDP (~10%) and resilient margins (countries under stress will likely see an increase in government bond yields, benefiting banks’ interest income). Stable deposit-based funding structures – supported by remittances from abroad and increased use of mobile technology – will also be maintained as  Liquidity levels remain high, at least in local currency, while foreign-currency shortages somewhat recede partly-dollarised economies.

In Kenya the report expects political uncertainty and deteriorating government finances to remain a drag on banks’ business prospects, despite relatively robust growth. Profitability will also be under pressure due to a rate cap while capital and liquidity remain robust. Mobile technology meanwhile is expected to support financial inclusion and credit growth. Like many African countries, a rigid economy will also continue to cause problems