‘Despotic Djibouti’ a dragnet to Horn of Africa development

Despite its immense economic potential, owing to its strategic location, Djibouti risks becoming an island of poverty in a sea of wealth as investors make the most of a conducive atmosphere promoted by respective governments in the Horn of Africa region.

The Horn of Africa, with an estimated population of over 160 million people, is perched next to the Middle East and along the Red Sea, one of the world’s busiest shipping routes for goods and oil from Asia to Europe via the Suez Canal.

Synonymous with volatility yesteryear, the region is undergoing a makeover and is in the cusp of fulfilling its potential as the next frontier of economic development, thanks to the emergence of liberal governments.

In Ethiopia, since assuming power and in April this year on a campaign premised on rediscovering democracy and national reconciliation, Prime Minister Abiy Ahmed has taken a series of fundamental steps to liberalise the economy. Key to the reforms includes privatising state entities.

In a major policy shift from the stance from the previous autocratic regime, investors can buy minority stakes in sectors previously regarded out of bounds to private enterprise.

Direct foreign investment has been secured, most prominently the US$3 billion economic aid package granted by the United Arab Emirates, following a visit in June by the Crown Prince of Abu Dhabi, Mohammed Bin Zayed al Nahyan.

Together with neighbouring Somalia, Ethiopia has discussed plans to abolish trade barriers as part of efforts to create a single market in the Horn of Africa region.

Ahmed, in a meeting in Mogadishu with Somali President Mohamed Abdullahi Farmajo (in power since 2017), disclosed plans to invest in a number of Somalian ports and in road networks to link the two countries and expand trade.

Ethiopia has established peace with Eritrea after over a decade of hostilities. They have reopened border crossings, restoring direct road transport for the first time in two decades.

The formal opening of the frontier paves the way for cross-border trade between the former foes.

Eritrea is considering building a port on its Red Sea coastline, challenging Djibouti’s position as host to key port infrastructure at one of the world’s busiest shipping routes.

Eritrea and Somalia have also agreed to restore diplomatic relations, in another development buoying confidence in the Horn of Africa’s investment and trade prospects.

The probable lifting of sanctions against Eritrea is set to pave way for economic integration of the Horn of Africa.

Ethiopia, Eritrea and Somalia are spearheading tripartite plans to strengthen the economic and security stability of the region.

Nikki Haley, President of the Security Council, a principal organ of the United Nations (UN), welcomed the aforementioned breakthroughs as representing “a historic and significant milestone with far-reaching positive consequences for the Horn of Africa and beyond.”

However, in contrast to the prevailing positive sentiment sweeping across the region, Djibouti is increasingly emerging a pariah state.

Strongman Ismaïl Omar Guelleh, president since 1999 after succeeding his uncle- Hassan Gouled Aptidon- who ruled since independence from France in 1977, is leading a regime ever more hostile to investment, raising concerns it is lagging behind its neighbours and weighing down prospects of regional economic development.

This past weekend, Guelleh’s defiance of court orders against the stripping Dubai firm, DP World, of its 50-year contract to manage Djibouti’s container port was back in the spotlight, months after the tiny country disregarded a verdict on the mater.

In February, authorities in Djibouti abruptly cancelled DP World’s contract to run the Doraleh Container Terminal (DCT) and seized its facilities, which the port operator had designed, built and operated. 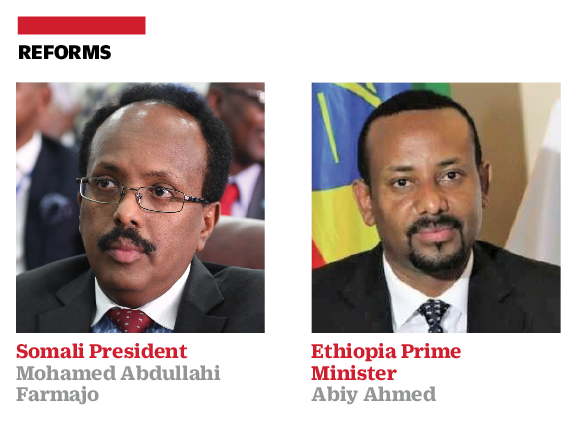 The High Court of England and Wales in London has continued the injunction, first made on August 31, prohibiting the national port company, Port de Djibouti, from interfering with the management of the Doraleh Container Terminal.

DP World has confirmed it would continue pursuing legal means to defend its rights as shareholder and concessionaire in the terminal.

“This is yet another (verdict) in a series of rulings, all in favour of DP World, that demonstrate Djibouti’s continuing disregard for the rule of law,” said a DP spokesperson.

The company underlined its belief that companies intending to operate, or already operating in the country, needed to seriously consider dealings with Guelleh’s beleaguered government.

“By its continued autocracy and defiance to court rulings, Djibouti is throwing spanners into the works of the region realising its potential as a global economic hub,” said Radhiya Ibrahim, Horn of Africa socio-political commentator.

Government insisted it had decided to nationalise DP World’s stake to “protect the fundamental interests of the nation and the legitimate interests of its partners.”

According to PricewaterhouseCoopers (PwC), DCT has been a major catalyst for growth.

Pessimistic projections of the country’s economic prospects coincide with rampant poverty in Djibouti, despite its strategic position in of the busiest shipping lanes.

The hosting of foreign military bases is an important part of Djibouti’s economy. This is due to its strategic location to the Bab-el-Mandeb Strait, which separates the Gulf of Aden from the Red Sea and controls the approaches to the Suez Canal.

The United States, France and Japan pay an estimated $123 million, combines, for their military bases in the tiny country.

In addition to revenues earned from military base rent, Djibouti has in the past two years accepted some credit loans running up to $1.4 billion, more than 75 percent of its gross domestic product, from China.

With public and publicly guaranteed debt more than doubling to reach 87 percent of GDP in 2017, there are concerns over the country’s ability to service the arrears.(