Towards amending the term ‘amendment’

By Edwin Musonye and Patrick Musindi According to Richard S. Beth, modifications are [usually used in]supplementing or superseding existing laws; and may be done at each separate points or on an entire provision desired. This stance reinforces the need for categorizing modification of the constitution into being either a change/replacement, amendment, alteration, adjustment or revision. Such a framework has three practical applications. Promotes ‘neatness’ This enables developing guidelines such as the time-spans allowed before certain modifications can be made. Establishing well-known period for modification activities boosts democracy. Citizenry are prepared early and there are no rooms for ambush. This line of thinking entrenched election dates in the document to prevent people of power from arbitrary choosing ‘best time for themselves’. Some influential people have openly pronounced eight years as being the ‘internationally accepted review period’ for any constitution without substantiating the claims. 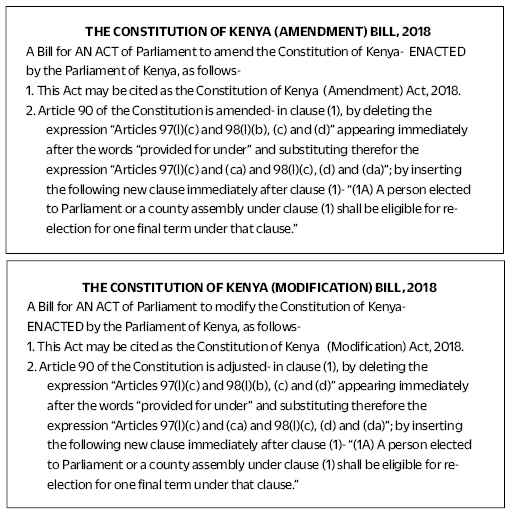 Provisional time-lines for modifying elements in the Constitution Modification Element Minimum Period Change /Replace 50 years Amendment 20 years Alteration 10 years Adjustment 5 years Revision 2 years Also, numbering the modifications makes it easy to track and evaluate their history. For structuring the draft bill As stated earlier, with or without a referendum, the constitution is still being modified. But short of adopting the definitions recommended here, we have already got ‘amendments’ for minor modifications. An example is captured above. The true position should be as captured below. And, given that adjustments happen not earlier than five years, the modification is valid. But, persistent calling of the modification an amendment makes it fail on accounts of, (i) substance and (ii) time. Create framework for deconstructing a composite proposal This is well demonstrated in Thirdway Alliance’s ‘Punguza Mizigo’ campaign that shoud culminate into a bill to modify the Constitution. The 15 elements proposed for modification (source: thirdwayalliance.com, retrieved on 30 October, 2018) are best evaluated when inputted into the classification frame. It turns the campaign is seeking two amendments, eight alterations, one adjustment, 0 revisions and, in total, 11 modifications. It also reveals that the remaining four elements don’t even qualify as constitutional modification elements!! The analysis results are presented below The frame can equally analyse and synthesise the proposals by Kamket Kassait, Caleb Kositany, Cornely Serem, and Joshua Kuttuny among others (individually or collectively) for harmonization and/or consolidation. Others measures include reducing cost of running Parliament from current Sh36.8 billion to Sh5 billion per year, to save to save the taxpayer Sh31.8 billion. The country can also stop the wastage of public funds and cap salaries of elected leaders to a maximum consolidated pay of Sh500,000 for the President and Sh300,000 for Member of parliament per month. All elected leaders should not be paid any other allowances besides salaries determined by the SRC. Further, corruption and theft of public resources cases ought to be tried within 30 days and all appeals be exhaustively concluded within 15 days. Finally, constitutional commissions should comprise of not more than five part-time members, to sit on a necessity basis, and shall be paid a sitting allowance per sitting determined by the SRC. 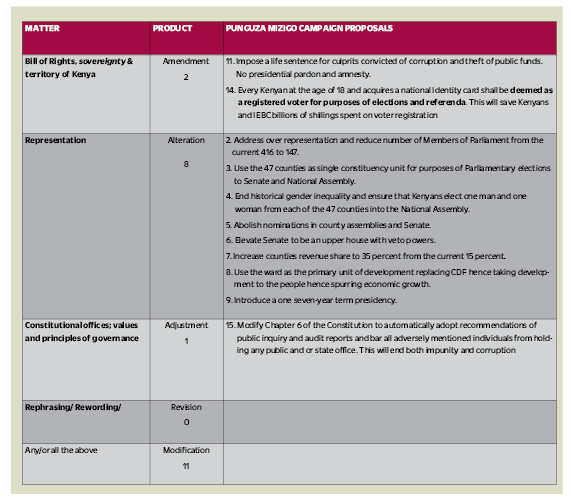 Conclusion It’s worth noting that this frame brings up new challenges when applied to ordinary statutes. It’s evident that the term ‘amendment’ has been used to liberally mean modification as seen in the excerpts above. Whereas, changing /replacing may apply equally to both constitution and statutes, amendment, alteration, adjustment and revision may affect or involve a dissimilar formulation. There may be more to good constitution documentation than blindly adopting what others are doing in their jurisdictions or adopting their terminology.