A short history of the Mt Kenya mafia, as told by the CIA

The CIA recently released de-classified intelligence on the Kenya. Following is a portion of the highly sensitive report, quoted here verbatim.

The family and closest associates of the late President Jomo Kenyatta occupied many of the key posts in the Kenyan economy and accumulated extensive agricultural and commercial wealth during the 15-year Kenyatta rule. This Kenyatta clique of Kikuyu tribal leaders currently forms the only group in likely position to mount a stiff challenge to acting president Daniel T. Arap Moi—a member of the minority Kalenjin tribal group—and his major supporter Attorney General Charles Nionjo. The clique’s efforts to outmanoeuvre Acting President Moi have so far failed; their substantial investments in the Kenyan economy probably will deter them from making a blatantly unconstitutional move. For the longer run, the desire of the Moi-Nionjo group to increase its share of the economic pie and the growing public disenchantment with the Kenyatta clan’s economic monopoly could foment political unrest. Mounting economic problems will reinforce pressures for a re-division of the country’s wealth.

Family members and close associates control a large part of the land in the White Highlands, the homeland of Kenyatta’s tribe, the Kikuyu. At independence in 1963, the British established a fund to help the Kenyan Government purchase farms from European settlers in this area and redistribute them among land-hungry African farmers. Although hundreds of farmers were resettled through this scheme, some of the funds allegedly were used by family members and by Kenyatta’s ministers to accumulate land. To protect the holdings of its members and the family, government blocked every parliamentary attempt to limit land ownership.

Kenyatta himself owned only about a half-dozen properties covering roughly 4,000 hectares, mainly farms in the Rift Valley and in the district of Kiambu, where he was born. His fourth wife, Mama Ngina Kenyatta, however, owns at least 115,000 hectares including a 13,000-hectare ranch in the Kiambu District, two tea plantations at Matu and Mangu, and three sisal farms near the Tanzanian border. She also has considerable holdings in the resort areas around Mombasa and is involved in coffee plantations and in the Kenyan ruby mines.

Other members of the late President’s family have also prospered under his rule. His son by his first wife, Peter Muigai Kenyatta, holds a seat in Parliament and is part owner of Inchcape, a trading company that handles among other things the Ford Motor concession in Kenya. Peter Kenyatta and his sister Margaret, the former mayor of Nairobi, also own large tracts of land. The late President’s cousins include the director of Lonrho in Kenya, the chairman of the company that built the Mombasa-Nairobi gas pipeline, and Kenya’s sole film distributor.

Besides their other activities, Mama Ngina and Margaret Kenyatta are probably the country’s two largest charcoal and ivory traders—particularly lucrative businesses. Although the export of these items is banned because depletion of Kenya’s forests and wildlife threaten the underpinnings of the Kenyan economy, both women have been able to obtain special licenses and are rumoured to be involved in smuggling. For instance, shortly after a ban on ivory exports (except for tusks from elephants dead of natural causes or shot for control purposes) went into effect, the United Africa Corporation, whose chairman and chief stockholder is Margaret Kenyatta, received an export license for 1,250 baby elephant tusks.

Should Moi, with the aid of Njonjo and other supporters, consolidate his position during the transition period and gain the presidency in his own right—an event that seems likely at the moment—-the division of economic power could begin to shift; family ties to the transition government are tenuous. Although Njonjo and Finance Minister Mwai Kibaki are Kikuyus, both for the time being are principal figures in the Moi camp. Moi and Njonjo—both rumoured to be involved in land and other business dealings—could capitalize on the widespread dislike of Mama Ngina and on public discontent over corruption to take over large shares of the family’s holdings. Whether attempted as a first set toward widespread income redistribution or merely as a shift of resources in favour of the new rulers, such a move would almost certainly provoke a strong political response from the Kenyatta family.

The Kenyatta family’s hold on the economy is increasingly resented. Public criticism has been fanned by open parliamentary debate about scandals and high level corruption which has been widely publicized by the country’s free press. Students and faculty at the University of Nairobi are particularly concerned about the uneven distribution of Kenya’s wealth and income. They and, increasingly, the man on the street are very critical of the family’s involvement in the charcoal and ivory trade, which endangers vital national resources: (1) The destruction of Kenyan forests and scrubland for charcoal has reduced the habitat for wildlife and encouraged the encroaching desert, threatening tourism and the livelihood of most Kenyans who are subsistence farmers. In the last decade the country has lost 10 percent of its largest forest area, and one-fourth of the land now is classed as arid; (2) The constitution calls for a presidential election within 90 days of the president’s death. In the absence of an opposition party, the candidate of KANU (Kenya Africa National Union) will probably be proclaimed president.

Ivory smuggling is taking a heavy toll on Kenyan elephant herds, the main tourist attraction. Figures for 1973, the last time a comprehensive survey was made, indicate that poaching resulted in the slaughter of 10,000 to 25,000 elephants in that year. Recent reports indicate that in Tsavo National Park—Kenya’s largest park—the elephant herd has been reduced to only 2,000. Moreover, allowable Kenyan exports of high quality heavy ivory from mature bull elephants is down, leading to speculation that animals over the ages of 80-385 are almost extinct.

With the economy headed for balance-of-payments problems in the next several years after more than a decade of 5-percent growth, austerity measures may be in store, and popular discontent could grow. Kenya’s payments accounts are under pressure from several sources; Nairobi has already considered applying to the IMF for assistance:

Security worries due to Somali irredentism have put Kenya in the market for increased arms purchases. A US survey team has recommended a 10-year package to expand and modernise the Kenyan military at a cost of $560 million to $1,190 million. The first phase of the modernisation is scheduled to be completed by July 1979 and will cost Kenya $49 million. Almost all of the program would have to be funded by Nairobi.

Collapse of the East African Community last year adversely affected the balance of payments. Kenya lost its major African trading partner, Tanzania, which accounted for 10 percent of Kenyan exports, and tourism has suffered from the closure of the Tanzanian border.

The new government may find itself forced to cut back on consumer imports and on development programs to pay for increased military purchases and keep the payments deficit manageable. A cut in consumer imports would add to shortages that presently exist, especially for sugar and meat, besides aggravating inflation. If the development effort slowed, unemployment—especially in the cities—would likely rise, fanning the discontent of urban dwellers already cynical about the concentration of wealth in a few hands. Urban unemployment currently is severe, especially among university and secondary school graduates, half of whom cannot find work appropriate to their educational levels.

“Kenyatta has been ruthless in dealing with any challenge to his authority. Once a Moscow- trained revolutionary himself, he accuses Odinga’s faction for harbouring communist allegiances. He (Kenyatta) has portrayed the opposition as subversive and tribalistic and managed to completely neutralize Odinga… However, a new threat emerged, a young Kikuyu politician, J. M. Kariuki has emerged as a champion of the poor and the landless with a popular following that comes close to rivalling Kenyatta’s own. His goal is quite obviously, to succeed the old president upon his death.”

In truth, Kariuki was not a particularly admirable character himself. He was a playboy, an inveterate gambler, he himself owned two large farms, a racehorse, a light aircraft and several cars; he also had a reputation for sharp business practices and was rumoured to be the East African point man of a nameless South American drug chain. Members of Kenyatta’s inner circle killed him.

Surprisingly, Kenyatta himself was never a target of criticism. It’s the members of his own family who have aroused strong resentment. The focus of attention is mainly on the activities of two members in particular: his young wife, Ngina- ‘the wife of old age’ and his daughter Margaret, the Mayor of Nairobi. Both operate business empires and ruthlessly use their link with Kenyatta for personal gain. Ngina has become one of the richest individuals in the country with interests that include plantations, ranches, property and hotels. While an increasingly tired and disinterested Kenyatta spends most of his time with his kinsmen and his brother in law Mbiyu Koinange in Gatundu oblivious of what is happening, Ngina runs the country plundering with reckless abandon. Ngina and Margaret are involved in the ivory trade. They are accountable for the slaughter of some 70,000 elephants.” 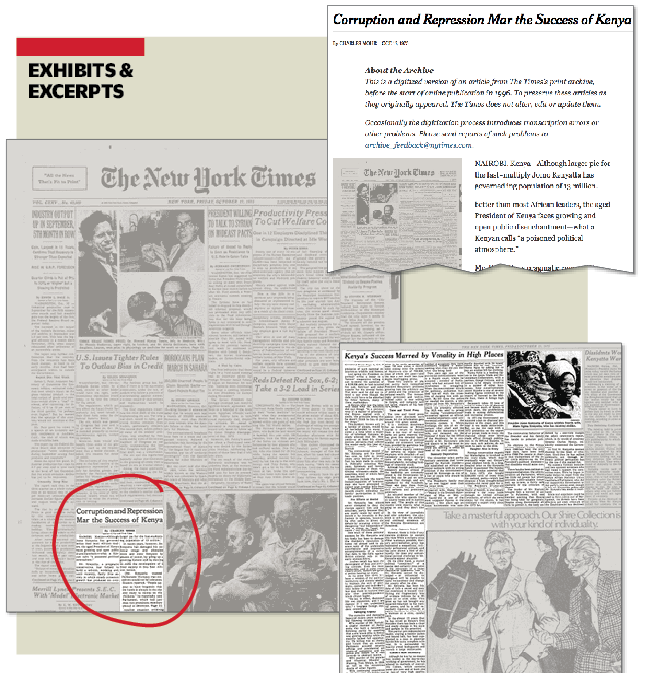 On Moi, he reports as follows:

“A tribalist at heart, Moi handed out key posts to Kalenjin members and promoted Kalenjin interests at every opportunity, using state power to undermine the patronage networks of the old Kikuyu elite established during Kenyatta’s regime and to cripple the business interests of his opponents. The business empire he constructed himself and his sons included assets in transport, oil distribution, banking, engineering and land. His inner circle known as the Kabarnet Syndicate became exceedingly rich, obtaining loans from banks and pension funds that they never intended to repay, and huge kickbacks from government contracts. Foreign businessmen regularly complained of the bribes that Moi’s regime demanded to enable them start businesses or win contracts. A Nairobi business magazine, ‘Financial Review’ which published reports in 1989 of political corruption in the coffee and tea industries was swiftly banned. A fake export scheme set up by Moi’s cronies in 1991 cost the exchequer an estimated $600 million (Sh54 billion)

Spreading from the top, corruption in Kenya became embedded in the system during the Moi years. Another British journalist Blaine Harden noted that “District Commissioners routinely steal cement from donor funded erosion prevention dams. Court prosecutors routinely demand bribes in return for not opposing bail/ the director of motor vehicles has become rich and politically powerful by demanding bribes from anyone who wants to license a big truck.”

None of this mattered to Moi. He was concerned only for his own interests. To celebrate his one-party regime, he ordered the construction of a sixty-storey office tower to house party headquarters and a party-run media centre. A centrepiece of the design was a huge statue of himself.” (